In the presence of six prime ministers, Ortuzar calls for a "more social Europe” focused on the well-being of people

The chairman of the EAJ-PNV’s central committee (EBB) and deputy leader of the European Democratic Party spoke at the summit that the European liberals and democrats held at the Egmont Palace in Brussels. 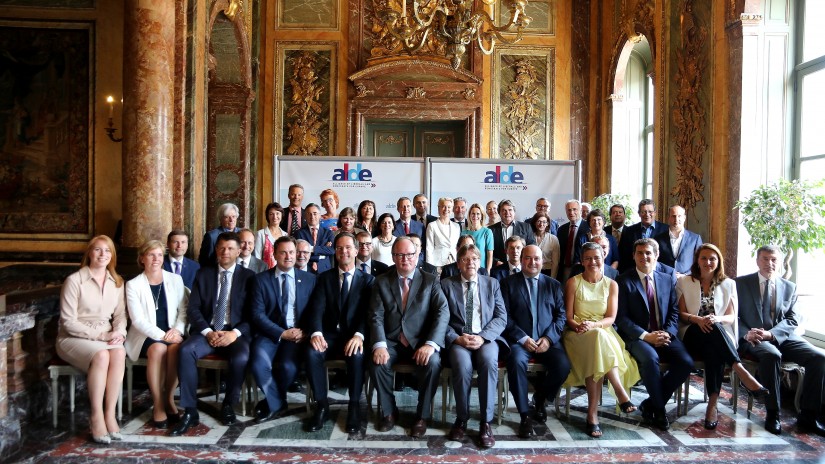 Andoni Ortuzar, chairman of the EAJ-PNV’s Euzkadi Buru Batzar, called for the European Union to become “a real social pillar that effectively tackles poverty and marginalisation and which is capable of guaranteeing the citizens of Europe a decent life. Social cohesion is part of Europe's real DNA and it is a precondition for stability, for social justice and for our balanced development”. Ortuzar, the Deputy Chairman of the European Democratic Party EDP), sent out this message at the Egmost Palace in Brussels, the iconic setting chosen by the ALDE Group (the Alliance of Liberals and Democrats for Europe) to hold the third edition of the movement launched by this alliance in 2015 under the name of "A Third Way to Construct Europe".

Six European prime ministers and presidents attended today’s summit, including the heads of government of Belgium, Charles Michel, of the Netherlands, Marc Rutte, of Denmark, Rasmussen Lars Lokke, and of Luxembourg, Xabier Bettel; along with the Commissioner for Competition, Margrethe Vestager, and the President of the European Investment Bank, Werner Hoyer. Before the meeting, the leaders posed for a class photo where Ortuzar sat on the left of the leader of the ALDE group in the European Parliament and the host of the event, Guy Verhofstadt, the former Belgian prime minister (and currently the European negotiator for Brexit) and on the right of the Commissioner for Competition. Ortuzar was accompanied at the Egmont Palace by the burukide responsible for International Relations, Mikel Burzako, and by the Basque Nationalist MEP and Deputy Chair of the ALDE Group, Izaskun Bilbao.

Verhofstadt opened the session. He was followed by Hans Van Baalen, Chairman of the European Liberal Party, and the Dutch Prime Minister, Marc Rutte Ortuzar then spoke. In order to achieve this goal of “guaranteeing a decent life” for all European citizens, the EBB chairman argued for implementing “policies dedicated to supporting the real economy that involves activating our main resource, talent, to harness the opportunities for innovation and generate new jobs offered by technology and to progress towards the principle of the circular economy and the social economy. Because there is no possibility of redistribution without development”.

Ortuzar recalled that the European project is celebrating the 60th anniversary of the Rome Treaty this year. “Looking back over that time, the achievements as regards peace or social wellbeing are indisputable,” he stressed, even though he recognised that “the European project is also more vulnerable than ever today, at a very delicate and crucial point for its future. On the one hand, we are facing global challenges such as the refugee crisis, climate change or the terrorist threat, which require a Europeanwide and common response. And, on the other hand, the European project is further away than ever from its citizens, with a worrying and steady growth of Euroscepticism in many of our countries”. Therefore, Ortuzar believes that the re-founding of Europe is necessary, “a reform that will take us to More Europe, yet to Another Europe”. And he thus called for Europe to return “to our roots, to the Europe of our founding fathers, Monnet, Schuman, of Adenauer, of Gasperi, to the Europe of freedoms, of democracy, of human rights, of the rule of law. The European Union must be, first and foremost, the Union of the Values shared by our free and democratic societies. We need a Europe, in short, that returns to humanism, to the founding values and where people are yet again at the centre of our policies”.