Ortuzar: “EAJ-PNV will bring sanity and common sense to bear in both houses of parliament in regard to the distribution of EU funds”

At the opening of a seminar organised by Sabino Arana Fundazioa to mark the 70th anniversary of the Schuman Declaration, the EBB Chair called for those responsible to avoid “electioneering and party-political squabbles” when allocating next-generation funding

Antoni Ortuzar, Chair of the Euzkadi Buru Batzar and Deputy Chair of the European Democratic Party (EDP) has assured that the EAJ-PNV will “bring sanity and common sense to bear” as required in the upper and lower houses of the Spanish parliament when it comes to allocating the EU funding destined for the modernisation of the economies of the Union in the crisis resulting from the Covid-19 pandemic. He also warned against instrumentalising this next-generation funding and called for it to be managed in a way that avoids the “electioneering and party-political squabbles” in which Spanish politics is currently mired. In this regard, he stated his conviction that “the Basque Country is ready to meet the challenge and be an agent for dynamism. Basque institutions will take a proactive attitude based on a culture of public/private partnership and will present innovative projects with a high technology content which will break the mould and shape the economy of the future, I cooperation with EU platforms and within the framework of the objectives set by the European Commission”.

Mr. Ortuzar and Mireia Zarate, Secretary of the Euzkadi Buru Batzar and Chair of Sabino Arana Fundazioa (SAF), opened a seminar organised by the EDP and the SAF in Bilbao with a proposal for discussion on the present and future of Europe in the context of its need to adapt to new challenges,. The debate marked the 70s anniversary of the Schuman Declaration. Enrique Barón, former President of the European Parliament and current President of the Spanish Union of European Federalists (UEF-España) gave the opening address. 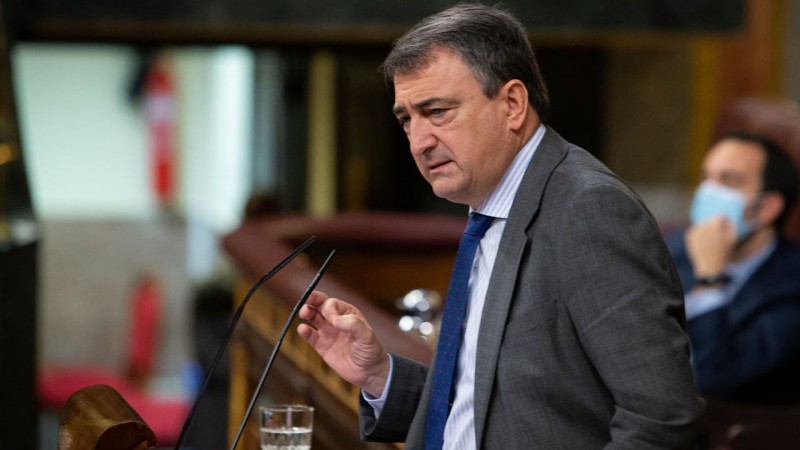