On behalf of the Basque National Party’s delegation, Andoni Ortuzar, the chairman of EAJ-PNV’s central committee, has officially acknowledged ETA’s unilateral, effective and definitive dissolution, as ratified at the international event held in Kanbo 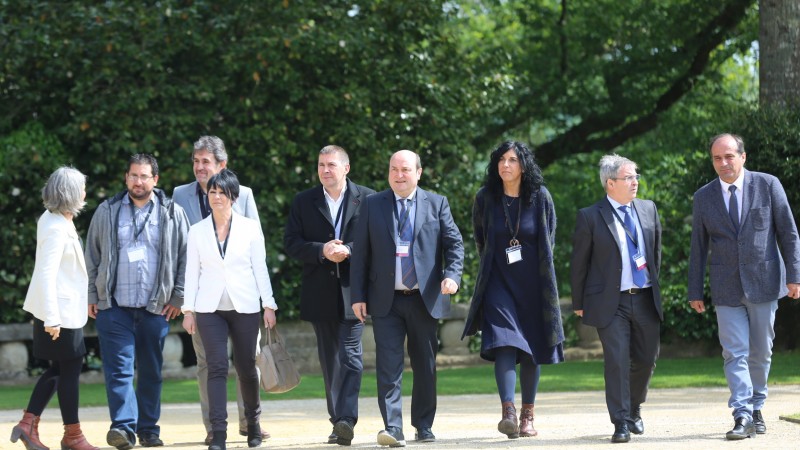 The chairman of the Euzkadi Buru Batzar (EBB), Andoni Ortuzar, has headed the EAJ-PNV delegation that has taken part in the International Event to Advance in the Resolution of the Conflict in the Basque Country, organised by the Permanent Social Forum and Bake Bidea with the backing of the International Contact Group (ICG), which has been held at Villa Arnaga, in Kanbo. The event has begun with a minute’s silence in memory of all those victims of ETA’s actions over the course of its 60 dark years of history. On behalf of EAJ-PNV, Ortuzar has officially acknowledged that ETA’s dissolution is unilateral, effective and definitive. The party leader and Head of Organisation, the burukide Joseba Aurrekoetxea, has completed the EBB’s representation, with the party’s full delegation also including Pako Arizmendi, chairman of the party’s central committee in the French Basque Country, the Ipar Buru Batzar (IBB); Joseba Egibar, chairman of the party’s Gipuzkoa committee, the Gipuzkoa Buru Batzar (GBB) and one of those involved in the Lizarra-Garazi talks; Unai Hualde, chairman of the Navarre committee, the Napar Buru Batzar (NBB), and first deputy speaker of the Parliament of Navarre and member of the regional political coalition Geroa Bai; and Eider Mendoza, chairwoman  of the Juntas Generales regional council in Gipuzkoa.