The President of EAJ-PNV Euzkadi Buru Batzar, Andoni Ortuzar, participated in the Smithsonian Folklife Festival being held in Washington until 10 July. For the jeltzale leader, "today the Basques, as Martin Luther King stated, have achieved a dream, to be here in the Mall in the centre of Washington in the golden mile of the world's capital, explaining what our country is, what our traditions are, what our sport is, what our language is, our culture and also bringing the future, bringing the best of our country so that today's Basque Country can be understood in this great showcase" is a dream come true. 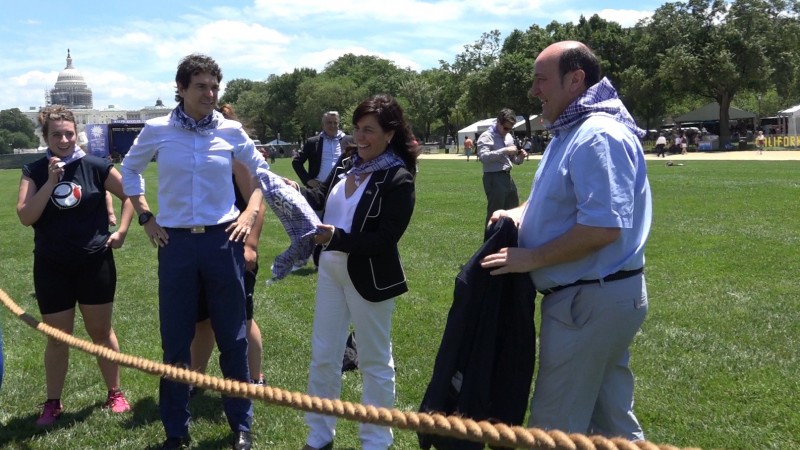 “Many years have been spent explaining what the Basque Country is NOT and now, finally, we can explain what the Basque Country is in reality. A world that opens to the possibilities of our country and the world which also opens its doors to diversity and plurality. Today we are explaining here, side by side with California, that we Basques are a people open to the world, a people proud of its traditions, very ancient in the world that wishes to participate in its future and the future must be written between all so that, once again paraphrasing Martin Luther King, that dream we had has become true," the President of the EBB emphasised proudly.

A year ago, Smithsonian invited the Basque Country to take part in its festival. Hard work was carried out during this time and Smithsonian and all the Basque institutions formed a great team which has made the inauguration possible, in the Arts and Industries Building, the 50th Festival which will have Basque culture as the protagonist in Washington until 10 July.

Participating in the inauguration were the Basque Government Minister for Industry and Competitiveness, Arantza Tapia, and Members of Parliament for Bizkaia, Unai Rementeria, Araba, Ramiro González, and Gipuzkoa, Markel Olano. The attendees also included the Congressman John Garamendi, Mikel Burzako, burukide responsible for external relations of the EAJ-PNV EBB and representatives of all the companies that have believed in and supported project.