The US diplomat and the chairman of EAJ-PNV‘s central committee, the Euzkadi Buru Batzar (EBB), have discussed the political situation and pledged to reinforce the economic and business ties between the United States and Euskadi-The Basque Country 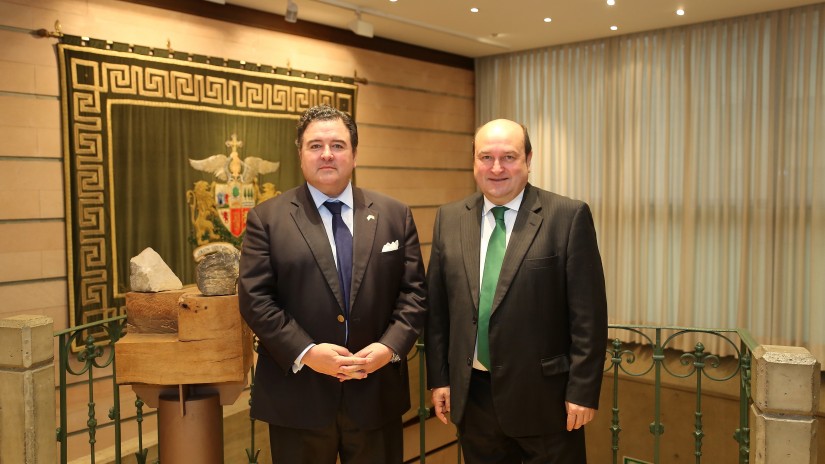 The Chairman of the Basque National Party’s central committee, Andoni Ortuzar, has today received the US ambassador to Spain, Richard Duke Buchan III, at Sabin Etxea. The meeting has lasted 50 minutes, taking place within an atmosphere of warmth and understanding.

Richard Duke Buchan III presented his credentials as US ambassador to the Kingdom of Spain on 11 December 2017, and he is currently making his first official visit to the Basque Country. Yesterday, he was received by the First Minister, the Lehendakari Iñigo Urkullu, and met the mayor of Bilbao, Juan Mari Aburto.

Duke Buchan III has shown a particular interest in learning about the Basque Country’s political and economic situation now that a new era has been ushered in following ETA’s formal and definitive dissolution. The ambassador has also asked Ortuzar about the key role EAJ-PNV is playing in the Spanish and European political arena, and he has applauded the ever-greater deployment of Basque firms in his country, with investments that are helping to create jobs and generate wealth.

Ortuzar, in turn, has informed the US diplomat of EAJ-PNV’s support for the Basque Country’s institutions and its socioeconomic agents in all those initiatives that further reinforce the political, cultural and economic ties between the United States, the world’s most powerful nation, and the Basque County, as all well as boost business and trade exchanges them between. The nationalist leader has also told the ambassador about the long history of the Basques in North America, from the shepherds in Idaho down to today’s highly skilled men and women working in the US, either in Basque companies operating there or in domestic corporations. Ortuzar and Duke Buchan III have agreed that the Basque diaspora in the US forms a community that preserves and protects its two identities in perfect harmony.