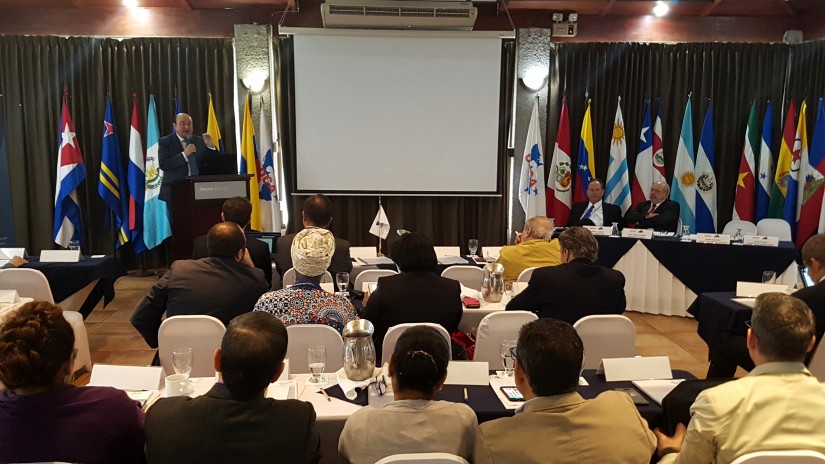 The president of Euzkadi Buru Batzar and vice-president of the European Democratic Party (EDP), Andoni Ortuzar expressed his confidence that the results of the European Elections on May 26, in which the popular and socialist groups lost their traditional majority, will translate into the creation of more plural and “more vibrant” institutions that will allow the European Union to tackle the enormous challenges that it will face in the near future with renewed vigour, including "Brexit, immigration, inequality, climate change and the European project itself”. Ortuzar spoke for half an hour at the Plenary Session of the 22nd Congress of the Christian Democratic Organization of America (CDOA) held in San José (Costa Rica), during which an Executive was elected for a new term presided over by the Chilean Juan Carlos Latorre.

Ortuzar began his speech with an assessment of last Sunday's European elections. In his opinion, these elections “showed a lot of positives but also cast a shadow”. First was the fact that, for the first time since 1999, “the elections recorded a turnout of more than 50%, which will result in greater legitimacy for the resulting European institutions”. For Ortuzar, another positive interpretation is the fact that “the two great families that have governed Europe till now achieved a modest result, as they each fell by more than 20 points, and the combined result of the two no longer guarantees the majorities required for election to the main posts in the Union, which will force them to negotiate and reach agreements with other political families, which is positive”. The jeltzale leader also included the good result obtained by two emerging groups in the pro-European sphere on the plus side: the ALDE Group, which includes EAJ-PNV and which has undergone a notable increase with the incorporation of the project led by the French President, Emmanuel Macron, and The Greens. “At least one of the two will be necessary for managing European governance and securing the majority required for electing the five key posts in the Union: the presidencies of the Commission, the Council, the Parliament and the European Central Bank, and the High Representative of the Union for Foreign Affairs and Security Policy”, the jeltzale leader analysed. “With this need for agreements and consensus, the Union is entering a period of greater vitality, which will enable it to tackle the enormous challenges that lie ahead, such as Brexit, climate change, immigration, inequalities and the rescue and updating of the principles that inspire the European project. There is also a need for the EU to design a stronger and more ambitious foreign policy, with which to address its positioning vis-à-vis the United States, Russia, China and even Turkey”, said Ortuzar. In the opinion of the nationalist leader, on the negative side, a shadow was cast over the May 26 elections by “the more than 220 MEPs who will sit in the European Parliament but who do not believe in Europe, and who will be a hindrance when tackling these challenges. Fortunately, in the end there were fewer than originally thought, but it is very worrying that the anti-Europeans won in countries such as France and Italy and that there are Europhobic governments, such as those in Poland and Hungary.

Ortuzar advocated that the European Union should “look again at Latin America”, and stated that “it is our vocation as a party to play a bridging role between the two continents, both from the European Democratic Party (EDP) and from EAJ-PNV. The Spanish state must play a decisive role in this task and, if the PNV has any influence in the next legislature in Madrid, it will also play an important role in this endeavour.”

One of the main themes of the meeting in Costa Rica focused on the way in which the political parties in the CDOA can and must reinvent themselves to combat populism and the new political situation. On more than one occasion, the EAJ-PNV was cited during the meeting as an example of “an old party that continues to govern, continues to win elections and, most importantly, continues to gain the majority confidence of the citizens it represents”. In the question and answer session, Ortuzar explained the party model, its specificities and its political praxis.

After the conclusion of the 22nd CDOA Congress, Ortuzar and the head of international relations, Mikel Burzako, will hold various political meetings on Friday. On Saturday, he will return to the Basque Country, where he will arrive mid-morning on Sunday. And on Monday he will chair the weekly meeting of the EBB.